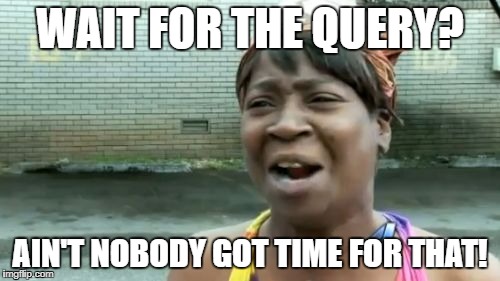 Snowflake Clustering Keys seem to have been a more recently introduced, but extremely powerful, feature of the Snowflake database. They’re a simple feature with a large impact on query tuning and run-time query performance, particularly during scans. There’s a clever concept in Netezza called zone maps, where info about each row is written into the extent/page on disk of what data is contained in it, for integers and dates. During the table scan, this metadata of information is read about the block to decide whether to go through the actual effort of using i/o resources to retrieve the block. Ordering the data based on frequently restricted fields yields large improvements in reducing scan times. Oracle also introduced these in 2014 I believe, however it is 2018 and my bet is the odds an Oracle DBA does anything with them or even knows anything about them is like 1 in 5, because Oracle is the opposite of simplicity that these other platforms are delivering like Netezza and Snowflake.

Snowflake is a columnar compressed database. It is doing something similar with the way it stores data in micro-partitions, which are 50 to 500 MB chunks of (pre-compressed) data. It doesn’t appear we have control over compression, which is fine; they are probably picking the optimal ones, plus having to manually do it has now been removed as a step for DBAs or developers to ignore.

The below image taken from their documentation shows the impact of how the data is laid out on a table during query run time. The query here is being restricted on the value ‘R’, and what we’re looking at is how many micro-partitions we need to actually read to satisfy this query. While Netezza was limited to date/int values, Snowflake is not – I believe the way a columnar compressed database works, it’s simply storing an integer representing the value R… so it’s easy to keep track of this (always int) metadata to decide whether to read a partition or not. That’s what I’m going to roll with conceptually in any case. The 0 to 100 clustering ratio is something Snowflake calculates to try and advise how well the table is set up for querying quickly and making optimal use of i/o resources. 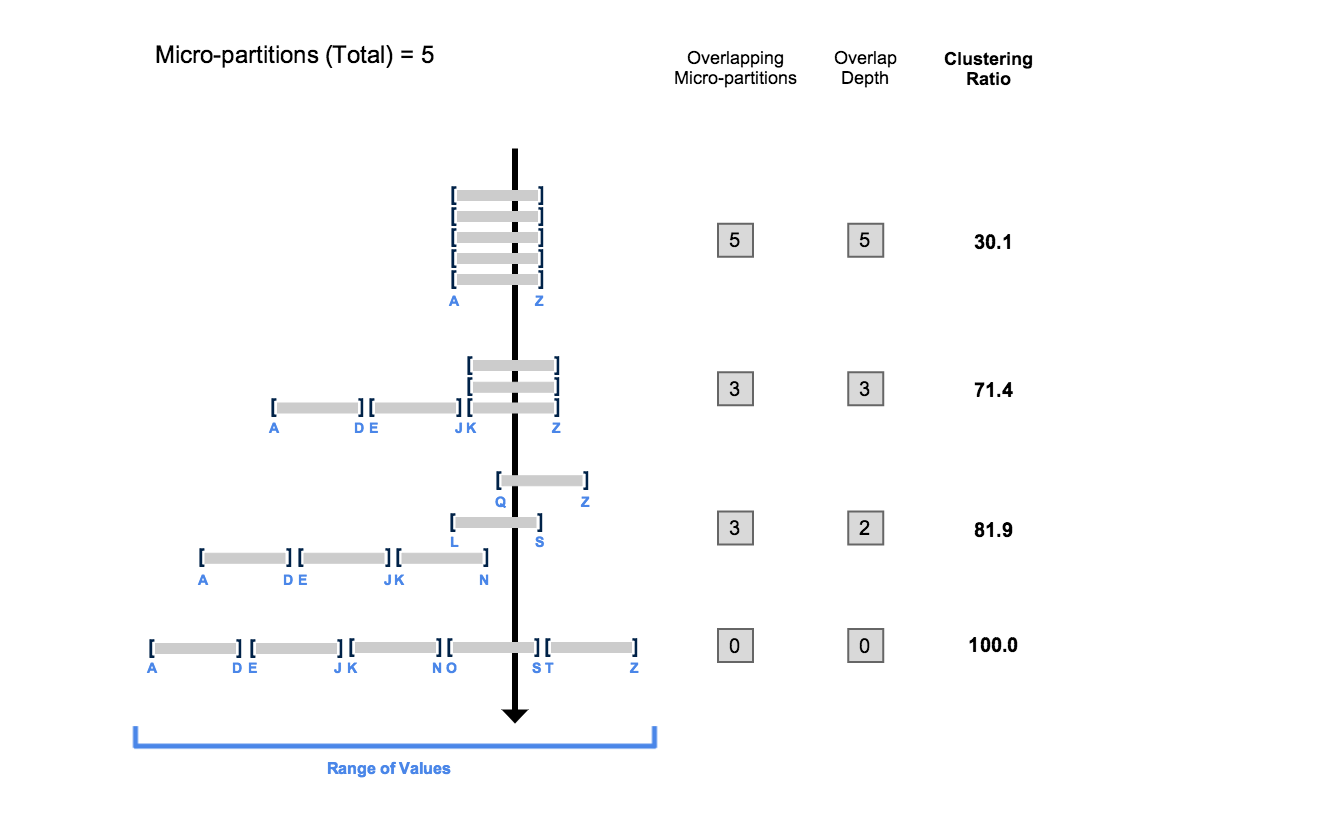 At the top we have the worst case scenario; bulk data in willy-nilly (technical term) order, in which case we need to read every partition. Let’s pretend that’s 50 MB; we need to read 250 MB to find the R records. There may not be any in the first partition, but it does contain both Alpha and Zulu so we need to read it anyway. As clustering improves down the table in different ways the data could reside in it, we see our scan going from 250, to 150, to 100, to just 50 MB of data being necessary to read. Needing to only read 20% of the table now is going to give us a serious boost in performance.

Next we have a pic on what the data looks like as originally ordered, then a set of clustering keys is applied to this table. The data is mostly already ordered on date; perhaps to imply something like incremental ETL batches. However we can see that filtering on id = 2, we’d have to read all 4 partitions. A recluster command based on using date and id yields the second set of more orderly clusters. 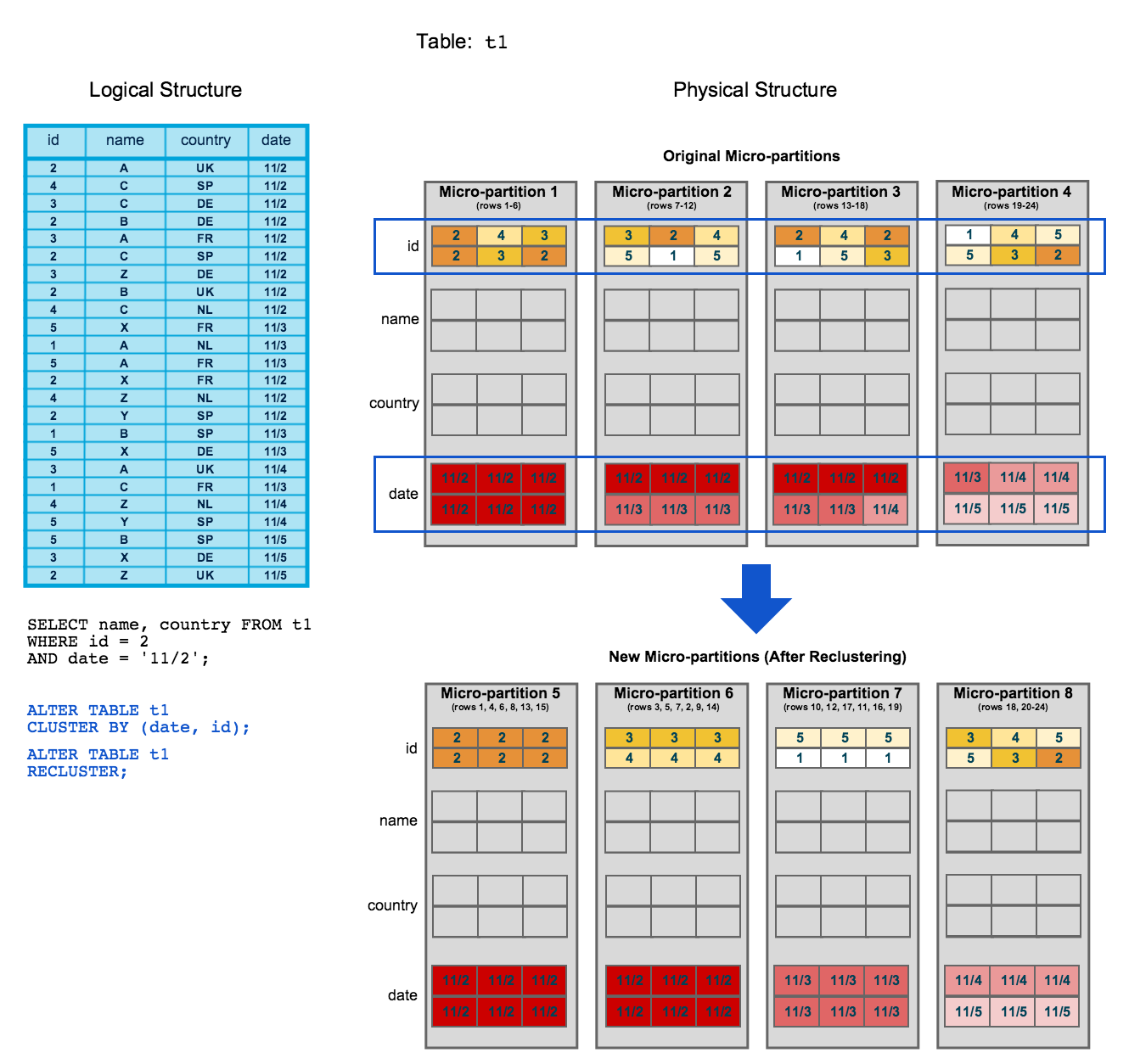 Note the data is perfectly in order in the reclustered set, however the the id is not. Why is this? My guess is it is to indicate that clustering means that are choosing the most effective way to cluster the data internally – somehow – and trying to show that they don’t simply mean sorting the data in order of cluster key precedence. Netezza has a similar feature; rather than manual sorts being performed, a table can be cluster based; the data is originally insert in whatever order is set by the ETL, however a call to refresh after that uses an algorithm to try and cluster alike keys together on disk. Generally speaking, on that system, a sort seems to work best when always restricting on column x (date) and sometimes the second sorted column y (product id) – whereas a CBT may work best on a table with fields of similar cardinality and competing rather than complimentary where clauses, such as sometimes being restricted on column a (product type) and sometimes column b (product package type) or sometimes both. We’ll try to see how similar this is to Snowflake cluster keys, which seem more alike Redshift (Amazon AWS columnar db) keys, which are specifically noted as sort keys.

To see how big a difference these make, using the small compute and a large table is the way to go. I wanted my own copies as I don’t know how Snowflake set theirs up (probably clustered on date at least) – I started copying the 1.3 TB TPCDS_SF10TCL schema STORE_SALES table… still on the small size node.

Eventually I figured out this was a HORRIFIC MISTAKE. Hours later I canceled this, nicely enough you can see how much progress it actually made. This was pretty unbearable, I can see why the size is ramped up when you want to load something serious. This is a CPU intensive load; reading all the data involved decompressing it, stitching rows back together, ordering them, then compressing it on write. 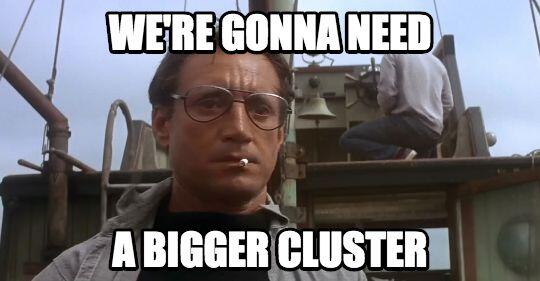 Life got a lot better stepping up my game to the big daddy 2X-Large nodes, although that went from 2 credits an hour to 32 credits an hour, so I certainly started blowing through my new account granted $400 allocation a lot more quickly. I also switched to the slightly smaller store_returns table.

From the bottom up you can see me creating a store_returns ordered by date, item; one ordered by item, date; then one I created with a limit 1 statement (it didn’t like create table as with a limit 0), a truncate, then an insert ordered by item and date. Which oops, I did twice. What is interesting to see is the blue/green; hovering over each, the green said remote, and the blue said local. Per the doc, the green is read from s3 storage, while local is read from local SSD drives on our warehouse nodes. SSD data cache? That is a totally awesome feature! I wonder if the size of the cache grows based on your node, or just based on what you are hitting, given the architecture is supposed to treat compute and disk separately and elastically address bottlenecks in either.

We need to write the same amount in all cases here. As I recall running these, the query was still running for some time after the read was completed; the compress and write through to disk takes some time. We can see the SSD caching itself was responsible for a good 6 minutes of saved read time. I do have a question though – why is my 2:07 repeat of my 1:42 workload coming from remote disk instead of cached SSD? As an aside you may notice I wasted 15 minutes of idle time on this expensive box between these – don’t do that! I’m the only one on my warehouse, and I haven’t done any activity between these. So why did my data cache not persist? I assume it expires shortly, or perhaps it is some shared layer quantity of storage with other Snowflake customer allocations?

Scan Test
I’m using the store_returns table from the TPCDS set, which depending on how I’ve sorted or clustered it, lands around 15.5 MB per micro-partition. I’ll also note the data is pretty artificial and synthetic vs. any real fact tables I think anyone works on, given how it’s all numbers and how everything seems to be fairly evenly spaced out, ie. every store has a similar gazillion amount of sales, as does every product, etc etc. I’m just going to filter on a month and some stores and see how long it takes to get my answer. I’ve also filtered on just the date, and just the store, to compare those results.

The full query will need to pull off 3 columns to do it’s work, and we should see micro-partitions eliminate a full table scan as they decide to only read those partitions where the data might reside. How well do different techniques work? I was surprised to see what I thought would work well – and probably would have worked better on Netezza, didn’t really work out the best here. It was also interesting to see the change in cluster results.

Snowflake provides a really nice query profiler which is where I’m pulling these numbers from; the less partitions we read/less time we spend scanning the better.

What is also interesting is that Snowflake has a trio of functions for exploring cluster data – one need not even run the query to see how many partitions will be read! This can be done on a per column or set of columns basis, and can be done with the actual restrict in a where clause as well. These appear to be free queries as well that simply read metadata; my warehouse is currently suspended yet these queries are working for me.

It seems the most useful one to me is leveraging SYSTEM$CLUSTERING_INFORMATION and applying a real restrict to see the amount of micro-partitions read.

Order matters in the second parameter as well. Given that is the case I don’t feel like it’s super reliable when passed multiple columns without additional actual restricts on the data. While these are straightforward to use for tables you’re clustering or ordering by a single field (in which case it appears you’d be best off ordering potentially anyway) for multiple fields they are a little trickier to interpret. I’d go with ideally passing in real predicates and looking for queries with the smallest total count from CLUSTERING_INFORMATION. If just using fields, I would consider looking for a higher constant count from the same function, which is a field that also appears order agnostic about the clustering keys passed in. This particular histogram (also from a different query) is showing that for 58,901 values, only 1 micro partition need be searched (very good!) but for 866 values, 512 would need to be searched to see if the data really existed there or not (not so great!) – the general goal would be to have the brunt of the data skewed toward the top/lower end of the histogram.

My takeaways from this;

I tried playing around with joins also to see what the effects were on Snowflake clustering join keys as well.